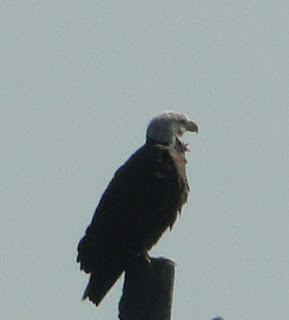 On the way to Jekyll Island we were under the watchful eye of one of our eagles.  He just sat there and examined us as we passed under his perch. 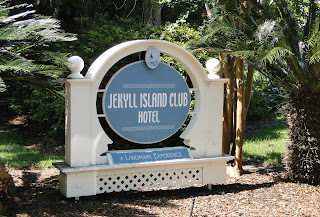 The tide was on our side and gave us a push up the ICW, making 9.0 knots ... fast for us.  With our timely arrival at the Jekyll Island Marina, 1157,  we decided to off-load the bikes and ride to the Island Club for lunch and then to tour the area. 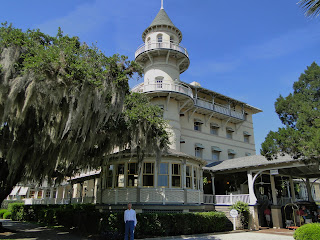 Lunch was served on an interior porch of this the Club.  We afterwards took a tour that was offered, a guided tram tour of the 240 acres and two of the vacation homes of the '20s rich. 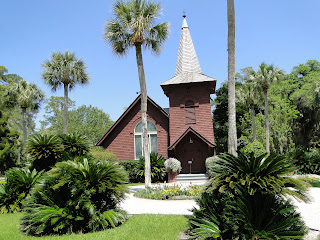 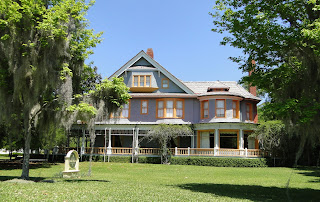 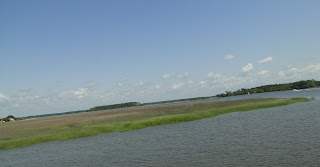 Leaving Jekyll we traveled through the "out-back" of Georgia.  Flat ground and marshes, shallow water and down Little Mud River to get to Walberg Creek and anchor for the night; the same location we anchored on the first loop April 27, 2008 ... same date of the same month ... 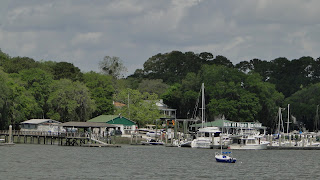 In the early afternoon we arrived at Isle of Hope Marina which is on the ICW east of Savannah.  We borrowed the marina's vehicle and drove to Savannah for country cooking. 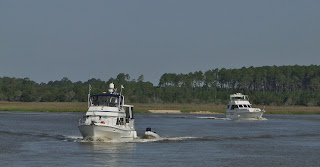 The next day MANANA and MIST arrived to join us for the trip to Beaufort and Charleston. 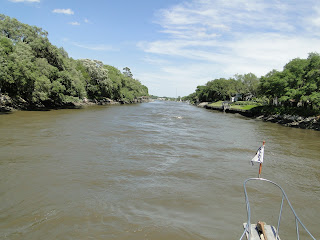 The channel known as Wappoo Creek which connects the ICW into the Ashley River and allows us to proceed on to the Charleston City Docks. 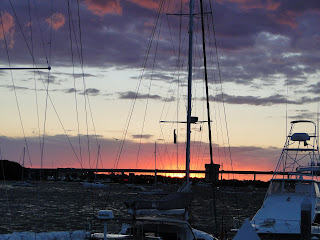 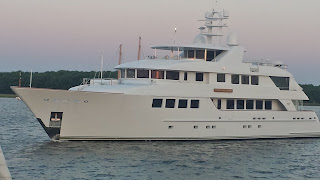 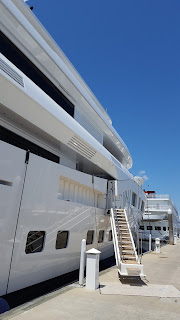 One of the "big-boys" with us; the LADY GAYLE MARIE with the folding in staircase; owned by Tom Benson who also owns the New Orleans Saints football team.  All is not well, however, Benson is being sued by his daughter and grandchildren over control of his business empire.  Blame is placed by the Benson heirs on the schism caused by his third wife ... after whom the boat is named. 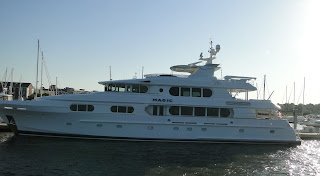 Reportedly owned by Merlin Hanson ... Merlin says all his boats have been named after Merlin the Magician ... King Arthur's Court.  Vessel is 200 tons, two engines of 1,480 horsepower each and draws some 6 feet 8 inches.  Has 10 private cabins and a top speed of 18 knots.  Holds 10,000 gallons of diesel fuel and 700 gallons of water ... can make 1,600 gallons of fresh water in 24 hours.  Boating magazines estimate the cost of the boat was some $10 million.  Hanson, who heads a conglomerate of companies including Hanson Cold Storage, PureFact, Hanson Mold and Eagle Technologies ... waited for two and a half years for delivery of his yacht.  He wants to share his yacht with others. 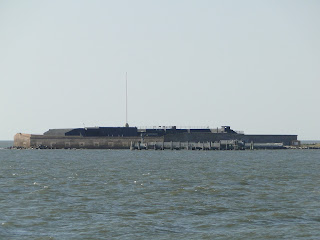 Departing Charleston from the Charleston City Marina you travel eastward toward the Atlantic Ocean and as you near Fort Sumter you must turn northward toward Sullivan's Island and proceed inside Sullivan's to enter the continuation of ICW northbound.  We are once again traveling with MANANA in our rear view mirror.  Expect them to be with us until we stop in Portsmouth.