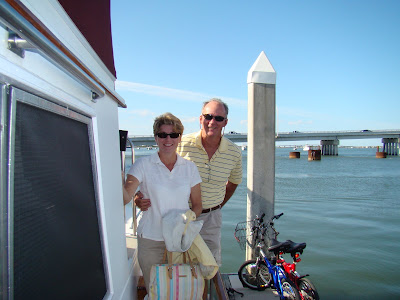 Finally, one of our greatest finds . . . we were rejoined with Don and Theresa, GREAT ESCAPE. After having its bottom cleaned and painted GREAT ESCAPE is leaving Sadler Marine and SONATA will rest there for Charlie to complete some much needed cosmetic work while Bonnie makes a trip to Virginia Beach. Only some 775 miles from mile marker "0", bouy #36, Norfolk Waterside. 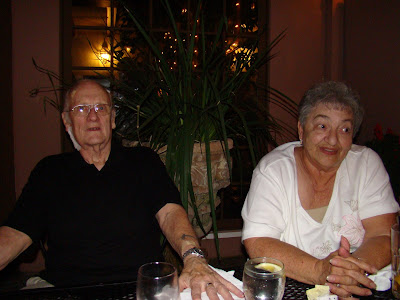 Charlie's Chief Machinist Mate when Charlie was Chief Engineer on the USS Newman K. Perry (DD-883), back in 1967-68, found us and Bill and Joanna joined us for dinner and reliving old times. 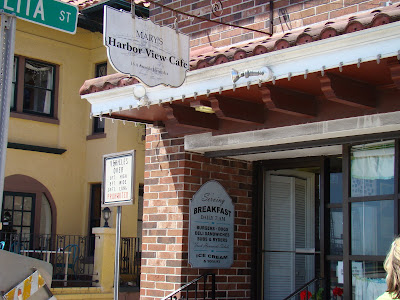 We found Mary's for brunch; two eggs over easy on biscuits with sausage gravy, grits, and hashbrowns . . . so much for the fountain of youth. 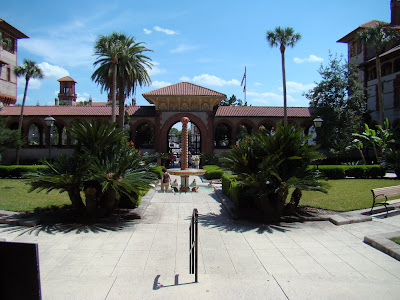 We also found Flagler College housed in what used to be the Flagler Hotel (Henry Flagler, part of the beginnings of Standard Oil, best known for the railroads he built down Florida out to Key West). 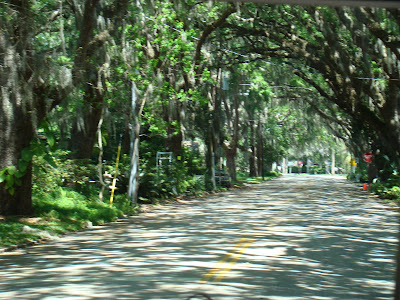 In St. Augustine, tourist again, we found the Fountain of Youth down this Spanish Moss draped street. 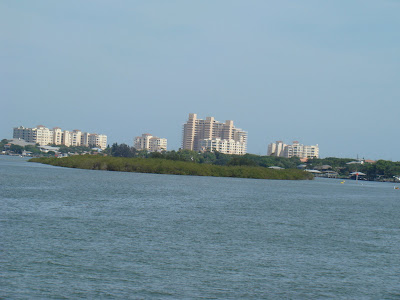 As we come through New Smyrna Beach we turn just before we pass Bonnie's sister's new Florida condo, in one of the buildings on the left side of the picture. 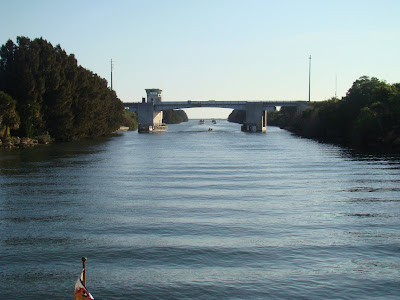 Just a pretty picture on the way from Titusville to Daytona. Rough open water is behind us and the waterway will be our travels to Portsmouth. Beauty is everywhere. 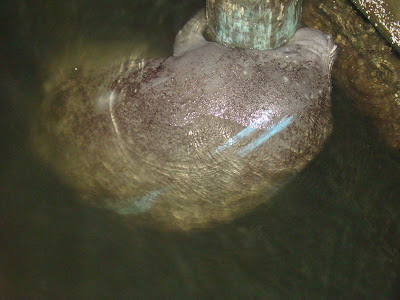 Hugging the dock pile for breakfast. It is said that the manatee are friendly and has hugged persons cleaning the bottoms of their boats. A shock, but harmless. 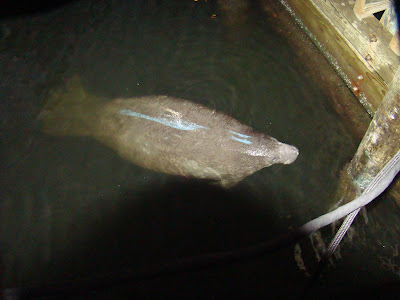 kThe morning we are to leave Titusville we see our first manatee. The manatee appears to have rubbed alongside SONATA and scraped off some of our blue bottom paint. The manatee is eating vegetation growing on the dock pilings. Believe the animal is some 6-8 feet long. 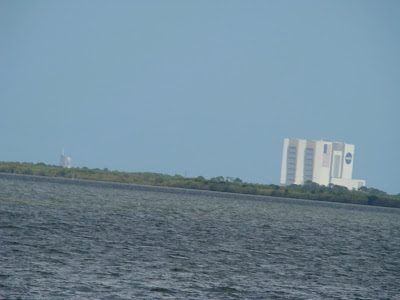 Passing the Cape we could see NASA in the distance but having had Houston we went on by to Titusville. 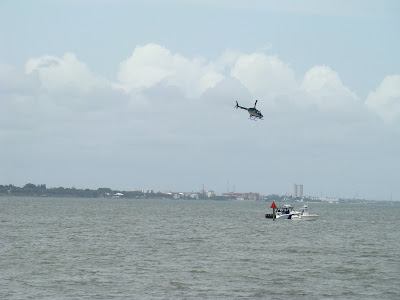 There was an morning of excitement as the Sheriff, then the Department of Homeland Security, raced past us . . . then a helicopter overhead . . . all must have been a drill. They then stopped, talked, and ambled back to whereever they came from. 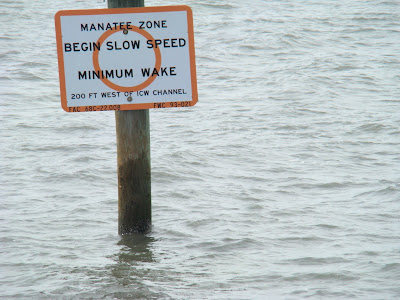 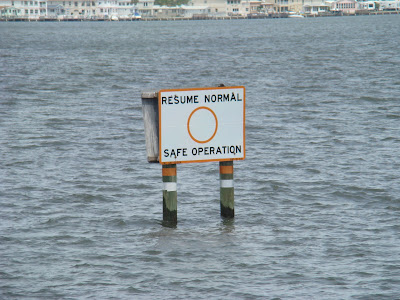 John is off to Hilton Head, Bonnie and Charlie are again underway, "Resume Normal Safe Operation." On our way back up to Palm Beach, then Vero Beach, Titusville, Daytona, St. Augustine, and Jacksonville.
Posted by sonata at 6:10 AM No comments: 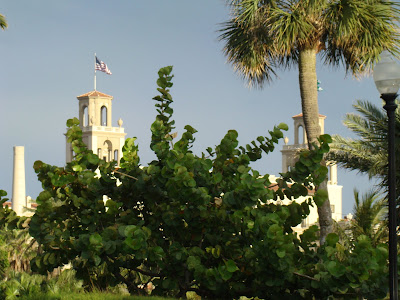 Having arrived in Palm Beach John and Charlie first took SONATA to the Sailfish Marina just inside Lake Worth, cleared customs and immigration, then on to the North Palm Beach Marina. Once there, touring Palm Beach was next along with visits with John's local friends. 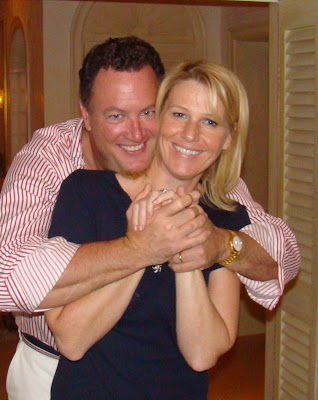 John and Charlie had lunch with Bill and his daughters then that evening Bill and his wife had the guys over for dinner. John and Bill first met eachother when they worked on Wall Street. 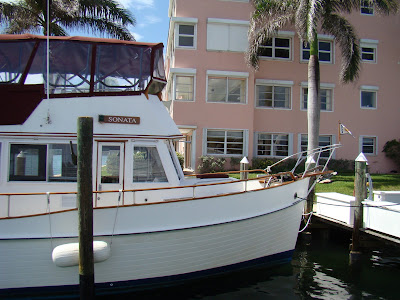 John's visit to SONATA was before his annual golf buddy outing at Hilton Head. John secured his rental car and drove to SONATA's next location, Hillsboro, Florida, where SONATA would remain awaiting Bonnie's return. John completed personal chores, got a haircut, went shopping, met SONATA at a bridge just to wave, and still made the trip in minutes . . . SONATA departed North Palm Beach at 0815 and arrived in Hillsboro just after 3:00 p.m. 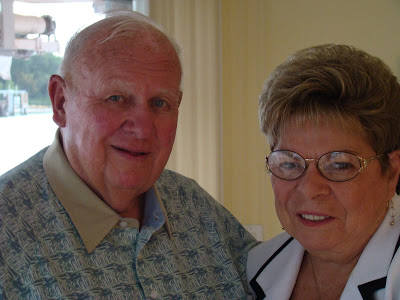 In Hillsboro we were most fortunate to be the guests of Hyer and Bailey. Bailey is Theresa's mother, you remember, Theresa of GREAT ESCAPE, our travel mates starting back in Canada and then on Lake Michigan, the Mississippi/Ohio/Tennessee Rivers. Hyer and Bailey's boat slip, next to their condo, was open while they are awaiting the next boat. They were so generous, wonderful people! 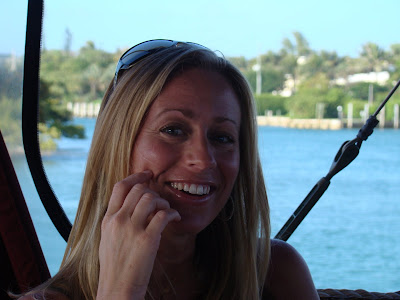 What a small world. Just up the street and around the corner from Hyer and Bailey lives Kim, the daughter of Elaine (remember Elaine from our stay in Alton, Illinois, and Pensacola). Kim came over for an enjoyable afternoon visit on SONATA. 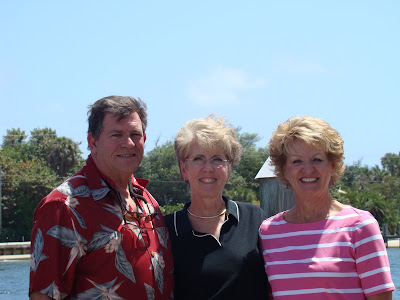 Johnny and Ann (of Virginia Beach and guests aboard while we were in New Jersey and New York) were vacationing in the area and came over for a visit and lunch. 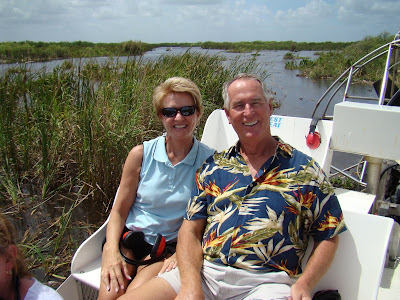 Yes, then it was time to be tourist! Off we went on an Airboat to see the swamp, the gators; what a ride. 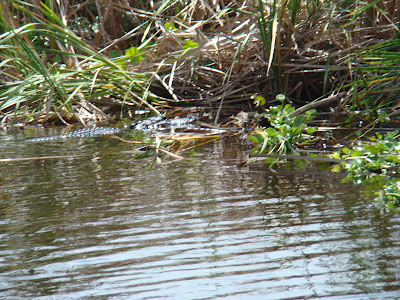 Gators up close and personal . . . 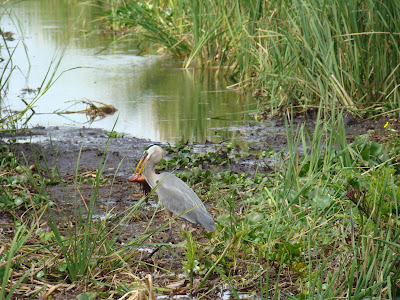 and Herons having lunch. 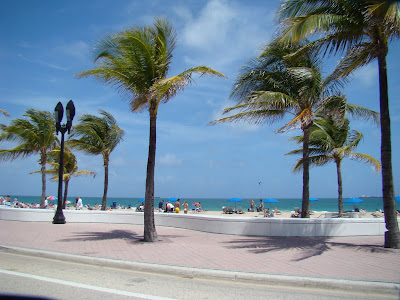 Then from the Everglades, gators and swamp . . . to Fort Lauderdale Beach and "Where the Boys Are" (were?). 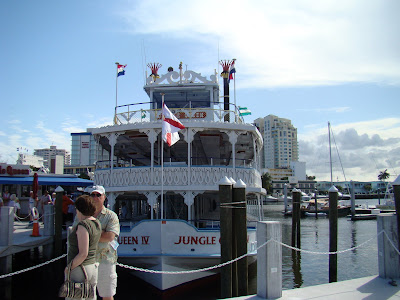 Another real tourist event, a boat ride on the Jungle Queen up the New River in Fort Lauderdale, America's Venice. 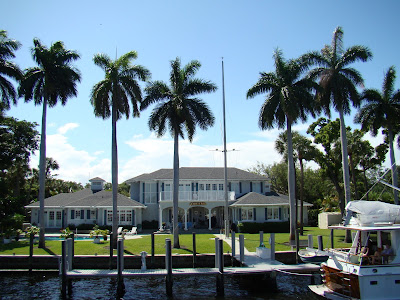 One home even displayed the mast from one of Ted Turner's boats used in the Americas Cup races, an expensive flagpole. 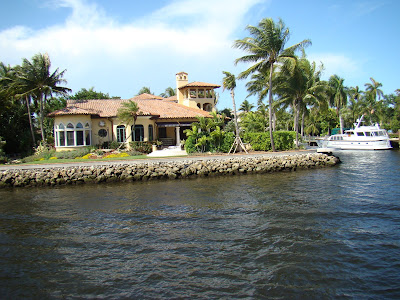 Beautiful multi-million dollar homes with their boats alongside were frequent along the New River. 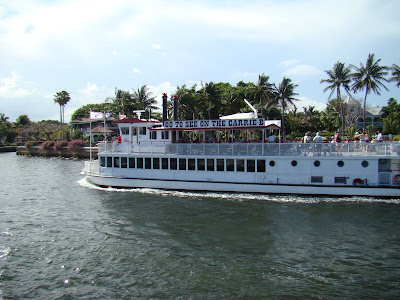 As we conclude our travels on the Jungle Queen . . . who do we see but an old friend from Norfolk. Yes, the CARRIE B (homeport Norfolk, Va), is giving tour boat rides in Fort Lauderdale. She will reportedly return to Norfolk for the summer tour business.
Posted by sonata at 5:14 AM No comments: